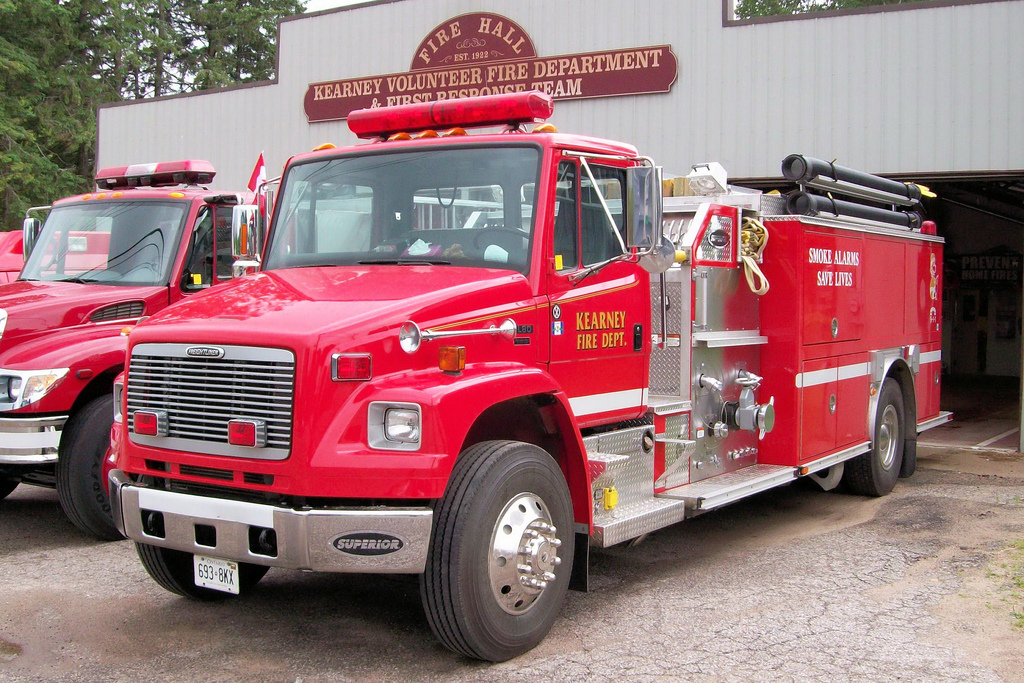 The Kearney Volunteer Fire Department was established on September 16, 1922.  The By-Law to enact the Fire Department stated that the Town would buy a fire truck, pump, and apparatus not to exceed $5,000.00.

The time between 1922 and 1945 concerning the names of Fire Chief and fire fighters has been lost as the senior citizens of the town who knew that information passed on.  However, in 1945 it is known that Harry White was the Fire Chief and the hall was located on Rain Lake Road at the top of the knoll on the right hand side as you turn off of Main Street today.

The equipment of the day was an army truck and a pump that carried the fire fighters in summer and a sleigh was used in the winter months.  In those days the department acquired a large pump that could be towed behind their truck and served the municipality for many years.  In fact that pump is still in the back of the hall today.

Shortly after the hotel burned down in 1966 the Town decided it was time to build a larger hall.  Mayor Harold Shaw went to Clerk John Lawson and asked if the town could afford to buy the materials because the fire fighters had agreed to build the new hall themselves on the site where the hotel had burned down.  The money was there and the new hall was built and stands on that sited today.

In 1989 the department expanded its services to include a medical First Response Team.  This expansion caused the need for a new bay to house the new vehicle.  The town applied for and received a grant from Northern Development and Mines in the amount of $15,000.00.  The fire fighters and local citizens then had to match the grant in labour.  The work began in the winter months and by summer the new bay was completed.  The Fire Chief at that time was Emmett White.

Training is provided every Thursday evening and alternates with Fire training one night and First Response training the next week.  Many of the members are therefore out each week on Thursdays if they work in the capacity of fire fighter/first responder.  Weekend training’s are also offered three to four times per year and outside training resources are used on these days.  Fire fighters/first responders are required to maintain their level of knowledge by attending a minimum of 75% of all training annually.

The Kearney Fire and Emergency Service houses a compliment of very strong community minded individuals who are committed to their mandate to provide professional, responsive, efficient and effective service to all of the residents and visitors of the Town of Kearney.  Their Mission will be accomplished through training, education and fire prevention.  When called upon they will provide rapid and professional response to all emergency situations and attempt to minimize the loss of life and property from fire, medical emergency or disaster.  They will show compassion for all those involved and be committed to the protection of the environment.

Fireworks are Prohibited in accordance with By-law 2018-24